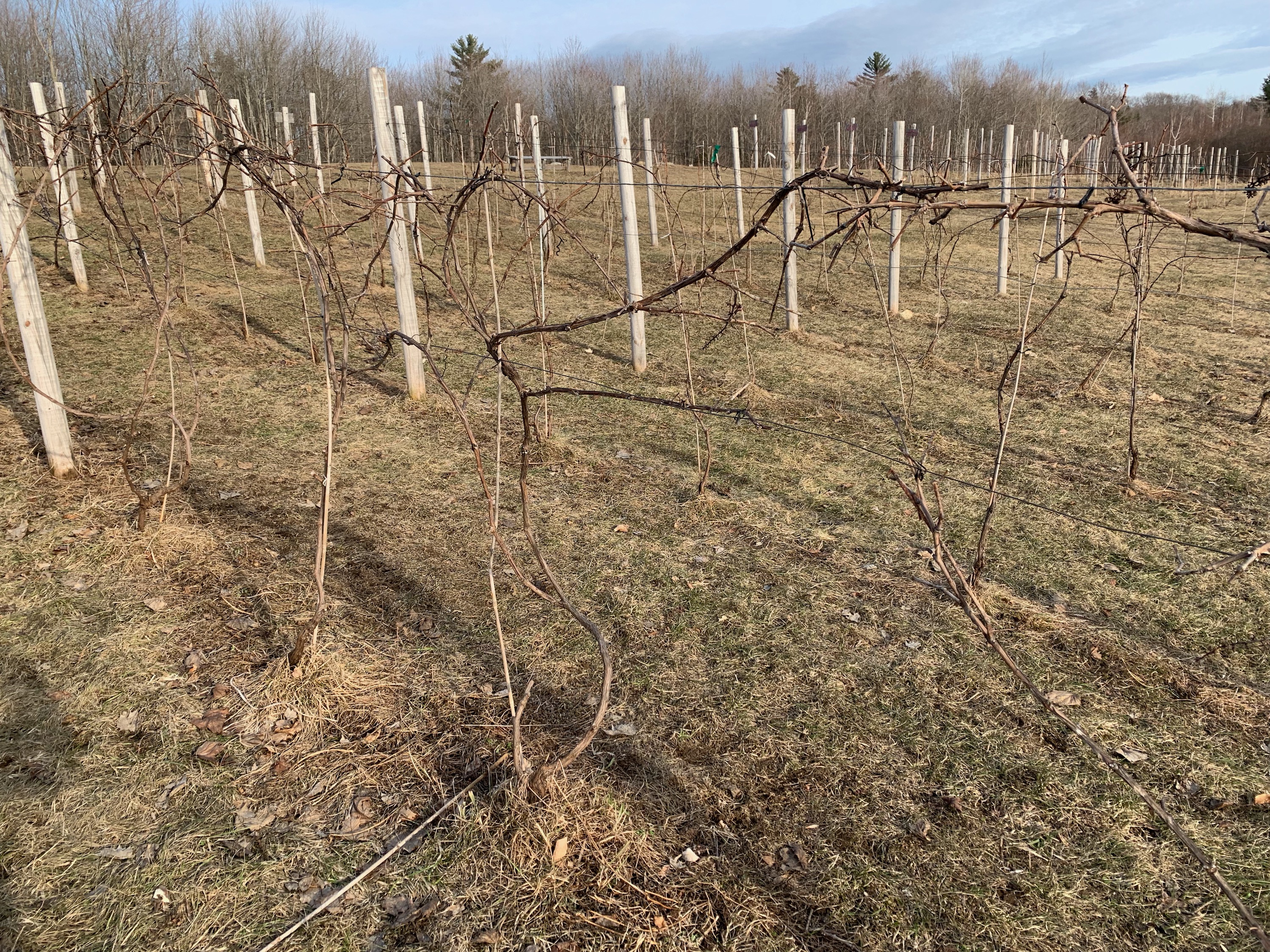 One of my least favorite parts of tending vines, but one that can’t be ignored. Pruning. It’s got the same ring to it as weeding for me. Except with pruning, I’m actually taking off parts of a healthy viable plant. With weeds you’re just getting rid of something that wants to take over your garden or yard and ruin everything. It’s not the labor part that makes me hesitate to go into the vineyard to lop off shoot after shoot of potential grape producing branches. It’s the fact that I haven’t mastered the skill of choosing what to cut and even worse, I’m cutting off large amounts of grape producing vines. Limiting the amount of grapes to use for making wine.

Pruning is done for many different reasons. It helps with making it easier to pick the fruit. To control yield. And most importantly to me, to improve grape quality. Also, from a lesson I learned last year, to help control disease, I’ve been tending grapevines for 12 years now. I started with a plot of about 100 vines. My initial attempts at pruning in those early years was basically just an attempt to see the fruit. I knew they’d do better if the sun could hit them during veraison, or ripening. I left a lot of plant growth thinking the bigger the vine got, the more grapes I would get. And not once did I have any issues with disease.

Last year changed my perspective on that. I started noticing traces of what I think was black rot. It’s a fungus that basically wipes out the grapes. What I learned was that it happens from being too humid and having poor air flow in the vineyard. I never thought I’d have a problem with air flow here. We always have a nice breeze. Things usually dry out fairly quickly.  Last year was different, and the vigorous vines with their multitude of leaves, didn’t help. So I’ve had to rethink and become a better “viticulturist”. Good wine starts in the vineyard. That comes down to really paying attention and tending to your vines, meticulously. So I gave the vines not just a haircut this year, but crew cuts. Each cut I made I had that metaphor in my head. A haircut. Like hair growing back after a haircut, so wouldn’t the canes and shoots of the vines. It’s harder to cut the canes. The canes are connected to the trunk. Think of the trunk of a tree. They’re basically the same. A cane would be the branches of the tree. While the shoots I would say are similar to the leaves. Without the canes, there are no shoots just like if there are no branches, there are no leaves on the tree.

Luckily, I know that even if you cut everything back to the trunk, there will be a bud somewhere that will be eager to burst this Spring. From that bud, you can start the process all over again. But who wants to do that? So I was careful to try and keep what I could and hopefully have enough grape production this year to start truly making some wine. From now on, however, “Winter” pruning will be mandatory in the vineyards here at 355 Berry Rd. It will mostly be done for grape quality. It’s my belief that the amount of fruit on the vine corresponds with the quality of the grapes. But winter pruning will also give me a head start on warding off diseases. It’s a lot of work, but being in the vines and giving them a chance to thrive is something I really enjoy. Even now, when I’m chopping large chunks of the vine away. I have faith it will be better in the long run. Hoping I can have that same attitude when it comes to Summer pruning. Stay tuned.

If you have been considering Bonaventura Vineyards as your wedding or event venue location. We do still have availability for 2019 and are actively booking for 2020, contact us today for a tour and you could have these well pruned vines as your ceremony backdrop! http://bonaventuravineyards.com/?page_id=128.